This year I’ve already presented at more events than I dreamt off at the start of the year (5).
And the invites keep coming in! (5 more!)
This is going to be a long read, a punishment from me to me because I slacked off in blogging in the past months.

So apart from being bored, there’s 2 reasons why you would want to read this post.
1) Interest in, but some fear of, attending and presenting at conferences, user group and community events in general.
2) You’re me from the future and you’re wondering about that amazement and the exciting feeling the young Jan had about these first events. You’re wondering about what fears you overcame and you want to look back at how it all started.

Expect to find the following:

So whichever reason you have, come on in and start reading!

This post started back when Jen Stirrup (blog | twitter) first confirmed me as a speaker at UK Power BI Summit, which turned out to be a great event.
I felt incredibly honored to be able to be in a line up that included what I thought of as almost legendary names.
I decided not to post it until after the event and decided to add a review of the event at the same time.

Days turned into weeks as I dove into new Power BI and SQL Server 2016 features and told myself I’d pick up that draft post later.

Who would’ve thought that postponing would lead to not posting  😛

Looking back at the event from where I stand now, I don’t want to review sessions I attended.
Reviewing the event itself seems pointless as well.
What I would like to review is the atmosphere, from both an attendee’s point of view and from a speakers point of view.

I didn’t expect a lot of people with the session being scheduled right before lunch time, I was grateful to just be there. With what felt like an almost full room, I was extra nervous.
Luckily, my colleague Kimberly Hermans (twitter), who’s a data scientist, was co-presenting with me. 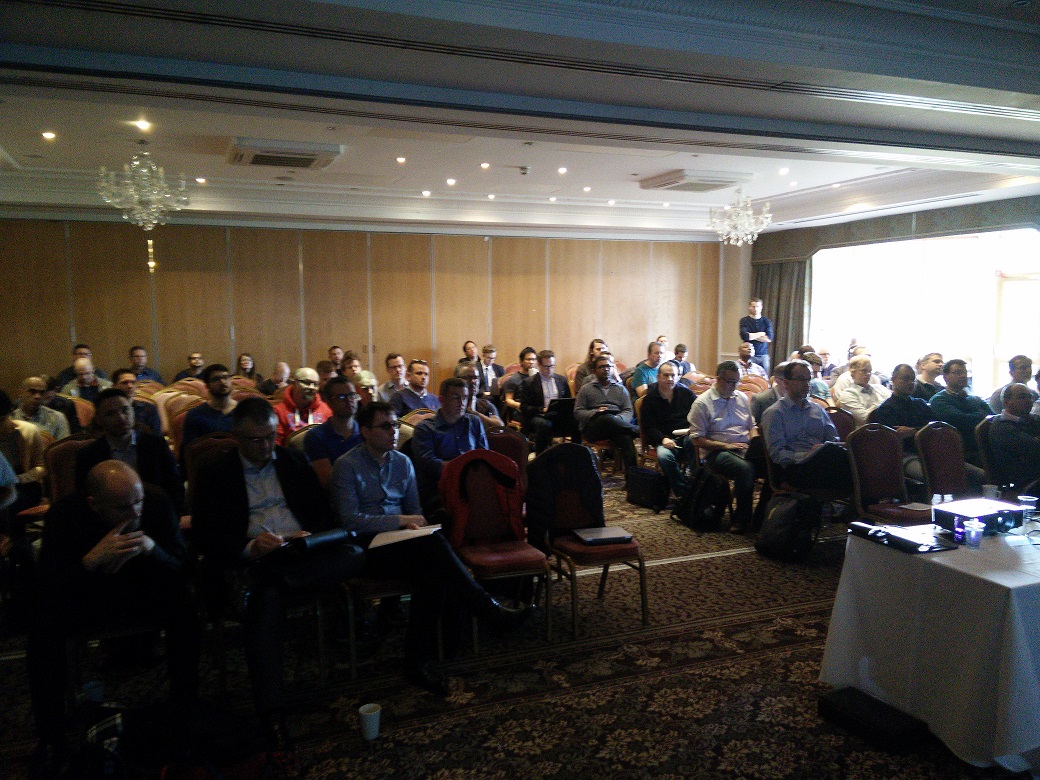 I can honestly say I enjoy co-presenting more because of the interaction and tempo changes. Also, with me “only” tinkering with SQL Server in a DBA & BI context in real life, it’s great to have a real data scientist on stage.

Before our session, I had a chat with Jen Stirrup, Will Thompson (blog | twitter), David Moss (blog | twitter). Several people even recognized me as if I was some kind of celebrity! I feel bad for not having had enough time to talk with everyone like Kieran (twitter), Kaye (twitter), Lars (twitter), Prathy (twitter) and quite a few other people.

The presentation was good but we went horribly over time because we didn’t even notice David Moss signalling the time.
It was only afterwards, when the adrenaline rush had settled, that it hit me that people were actually sacrificing their precious lunch time to stay in our session!
And of course I was incredibly happy that I got to speak in the UK, having my name on a list with people I follow and look up to.

The best part is, a couple of people came up to us afterwards. The first guy I talked with described he was in the exact scenario that the session was about and we had a great chat. This was the first time it was clear to me that I wasn’t just talking about something that interests me. I was actually talking about things that people were experiencing and I was impacting their thought processes and their lives!

That for me was great feedback, I would appreciate some feedback forms next time.
But looking back with my current experience, perhaps I’ll just start making my own forms.

As an attendee the start wasn’t that great. We weren’t allowed to board our first train. Our second train was delayed by an hour. The train to the speaking venue was delayed and we got off the train at a station that was an hour walk instead of getting off at the closest station.

Having missed more than half of the pre-con already, we just went to our rooms and practiced the session a bit more before getting dinner. Jen Stirrup was very understanding and gave us a small tour. The best thing about being a speaker at an event is that you can attend for free. But we did miss great content being delivered.

I definitely would attend this event in the future, even if I wasn’t a speaker.

Not thinking I’d be accepted, The 1st of march I replied to a tweet from Meagan Longoria (blog | twitter).

Apparently they didn’t have any other speakers because 2 days later I was accepted 😉
With this being a remote presentation, I was scared about not having the interactions with the audience that I normally try to have.
I was scared to completely fail in the USA in front of a lot of people I didn’t know and having Meagan unfollow and block me on twitter.

This was feedback I could work with! So I cut down on the “introduction” part of the session.
And I was a happy person, feeling stoked for having spoken at 2 events in 2 months!
Something that I couldn’t have imagined when the year started.

Because the event was in the USA I wasn’t able to attend, I would’ve loved to have a chance to speak with everyone there however.

Originally I was declined for this as the event was struggling to get the number they hoped for.
This event basically went online instead of having a large venue and have people and speakers fly in.
I appreciated the openness about the decline and of course I appreciated the invite to present remotely even more.

After the SQL Server Denver User Group session, I was a bit more confident that everything would work out.
Even as I was scheduled to be last in line of a long day.

I didn’t expect a huge turnout or a lot of interactivity and because of the format I luckily could just do my thing and focus on the content.

Sadly I never received feedback, but that’s how life goes I suppose.
I still was very happy to present and would gladly present again, even if it was to help out Steph Locke (blog | twitter) to fill out the agenda 🙂

I didn’t attend because the event was on a regular work day for me but would’ve loved to otherwise.

When I first saw this mail come in, I was so incredibly excited…
I even had to check several times to make sure the mail was real.

I was invited to a SQL Saturday! In Israel!
When I told some people near me, their first reaction was “Israel?! Is that even safe?!”, which got me scared 🙂
Palestine, Israel, war, terrorism, … These are no fun thoughts to associate with a SQL Saturday.

Luckily I met someone from Israel by pure chance, someone who apparenly was also organising this event!
So I reached out to Matan Yungman (twitter) and explained my situation.
He explained how life actually was over there and I became calm and happy to speak again.
Now I only had to deal with my fear of flying 😉

I was last in line of a incredible day of topics.
As I expected, at the end of the day, most people were already leaving.
And I don’t blame them as this SQL Saturday was held on a wednesday.
I still had a nice turnout with what looked like 10-15 people.

Apart from a microphone having a flat battery, the session went great and I had some nice interactions.
The feedback afterwards and the evaluation forms however were amazing having received a average 5/5 rating and useful information on people’s interest which enables me to improve the session even more.

Sadly enough I didn’t understand much of the Hebrew sessions, even though I could follow the slides a bit.
One speaker, Leonid Ore (blog | twitter), did spontaneously check with his audience and then changed his session to English when he noticed me.
The entire audience even asked their questions in English!
An incredible experience which humbled me even more than the experiences and talks I had with people in Jerusalem and at the speaker dinner the day before.

I did try to follow a SQL Server Internals session by Ronen Ariely.
Even with his explanation beforehand and his great demo and slides which were in English, the language barrier made it impossible to follow.

To wrap up, at the end of the event we had great local beers, can’t remember the name tho.
And of course there were some more fun conversations with Maria Zakourdaev (twitter), Geri Reshef, Adi Cohn (twitter), Ronen Ariely (twitter) and a fun but unknown mystery woman who’s name I forgot even tho Geri gave both her and me a lift 😀

So, if you ever get a chance to attend SQL Saturday Israel, go for it, even if you don’t know Hebrew.
Just like me you’ll be amazed at how fun and great the SQL Community over there is compared to the average image of Israel you receive through the news.
But don’t just stay for 2 days like I did, go there for at least a week.

5 more events to find me at before the end of june!

If it wasn’t enough that I got to speak at so many events already, you can find me at the following events in may and june.

That makes 10 events in 6 months time.
That beats even my wildest dreams of being invited to speak at 1-2 events this year!

If you attended one of these sessions or if you have a question, let me know below in the comments or on twitter.